We have been keeping an eye on Skyler's scoliosis. It has caused a bulge in his lower back, so we have been going to a local orthopedist and he just wanted to keep an eye on it. The last little while it looked like it was getting bigger so I checked into a specialist in Flagstaff. His name is Dr. Hales, and he is a great doctor! They took x-rays and found that at the top point of the scoliosis, its at a 45 degree curve and at the bottom its at a 55 degree curve. Dr. Hales said that at over a 40 degree curve its automatic surgery. So Skyler will go to Flagstaff Hospital on Dec. 13 and have the first surgery, they will go in just below the belly button with a 3 inch incision. That surgery will be about 6 hrs. Then he will go back in on Dec. 16 for the second portion of the correction. This will be on his side and will take another 6 hrs. He will have plates, screws, and rods from the bottom of his spine to about the middle of his spine. We are hoping to have him home just in time for Christmas!!!
Summer went through scoliosis surgery when she was a freshman. She has a scar that is from the middle of  her front to the middle of her back. It took almost 6 months to fully recover because they had to go through all her muscles in her stomach. Dr. Hales said that Skyler should have an easier recovery since he will have smaller incisions. He will miss about 6-8 weeks of school, so will be home schooled under the direction of the school.
He is taking it pretty well, considering all that he has gone through with his eye. He is such a trooper, I know the Lord gave him a lot of strength and endurance!
We figure he will probably be close to 6'11" when this all done. The doctor hopes that the surgery will take him to a 20/25 degree curve.
Posted by Skousen Seven at 1:46 PM 7 comments:

Skyler has decided to go back to Blue Ridge High!! Needless to say we are thrilled:) There are a few reasons for his decision to return, I'm just glad its what he wants. So all my boys will be at BR!! He will start BR tomorrow morning!
Posted by Skousen Seven at 12:08 PM 2 comments: 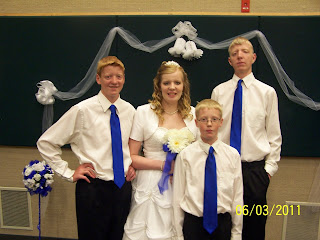 August and September bring three birthdays to our household within a few weeks of each other! Clay had his birthday on August 5, we celebrated it in St. George this year. He turned 12 and will be ordained tonight to become a deacon:) He will also be going to the temple to do baptisms for the dead tonight for the first time!! We are so proud of Clay and his worthiness to be a priesthood holder. He is excited to start passing the sacrament on Sunday.
Skyler is celebrating his birthday TODAY!! He is now 17, I can't believe how fast time goes by. He is such a good person, trys to be a good friend, even if they aren't. He is a junior in high school this year, so only one more year:(  He has an incredible spirit about him.
Hunter was my birthday present, being born the day before mine:) He will celebrate his birthday on September 6. He will be 15, I think I'm getting really old!!!!! He is also a worthy priesthood holder like his brothers, he is such a great example to his friends. I have 6 sons from another mother because he has chosen some awesome friends!! I love when they come over:)
HAPPY BIRTHDAY TO MY AWESOME BOYS!!!!!!
Posted by Skousen Seven at 8:17 AM 2 comments:

I never thought that these two mascots would be in our home together!! But Skyler decided that he wanted to go to Show Low High School this year. It was a very difficult year for him last year at BR. So after much pleading, begging and more begging we finally gave into him. I went with him to register and get him into his IEP program. I have to say, I'm really impressed with their IEP counselors. He is really happy there and has made a lot of friends! I think his height and shoe size makes him the talk of the campus:) He is 6' 10 and has a size 21 shoe!!! Yes, I found shoes for him at Ross and they were only $20!!!
Hunter is fitting right into his freshman life at Blue Ridge! He is going out for football and of course checking out all the girls?!?!? His classes are going well and has some with his good friends.
Clay is in the 6th grade and likes his new teacher. He is such a good student, so I don't worry too much about him:) He is such a good kid and really makes friends easily, he likes to be sociable and  got into trouble last year for talking too much :(
Being the first week of school, we will see what the next couple of months brings! Hope everyone is having a good start to the school year!!!
Posted by Skousen Seven at 4:12 PM 6 comments:
Newer Posts Older Posts Home
Subscribe to: Posts (Atom)